The reason we get married is to torture our spouses, right? I mean, that’s not the sole reason. There’s also love, commitment … you know, the stuff that fits on a Hallmark card. But when you are a movie geek, you also are allowed to rely on that passion to put your significant other through an ordeal – like this Lord of the Rings fan does to his poor, patient girlfriend.

Such is the curse of those who choose to lie with Movie Geeks. How old is this video, though? Shared via ebaumsworld, the picture quality suggests it was filmed on a Super 8 reel, then spliced together into a montage of disgust and frustration. Also, Lord of the Rings quotes? This must be 2003, when Legolas hung on the bedroom walls of teenage girls (and this dude) around the globe. I like how the lady can’t make eye contact with either the camera or her boyfriend. The shame. At least the guy’s voices are decent. I reward you one meme: 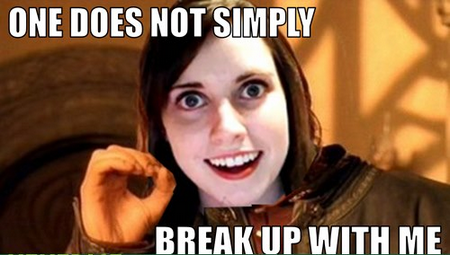 See more on Know Your Meme

What is it about Lord of the Rings fans and their need to record every aspect of their fandom? Do they all have to include some version of "My precious," whisper-screamed like Gollum?

There’s no update on the ebaums page, so we don’t know for sure whether the dating couple in the Lord of the Rings video stayed together, or even got married. If they did, I hope this guy updated his material. You know, there are three Hobbit films that he could be quoting incessantly.

Peter Jackson concludes his Hobbit trilogy with The Hobbit: The Battle of the Five Armies on December 17.
Comments